This website is no longer under construction and to celebrate both this and the going over 200 likes on my facebook (yaaay!) I’m going to organise something fun for us all! FULL ON! You’ll hear from me soon about that!

My gig in april @ Café de Buck was a succes! 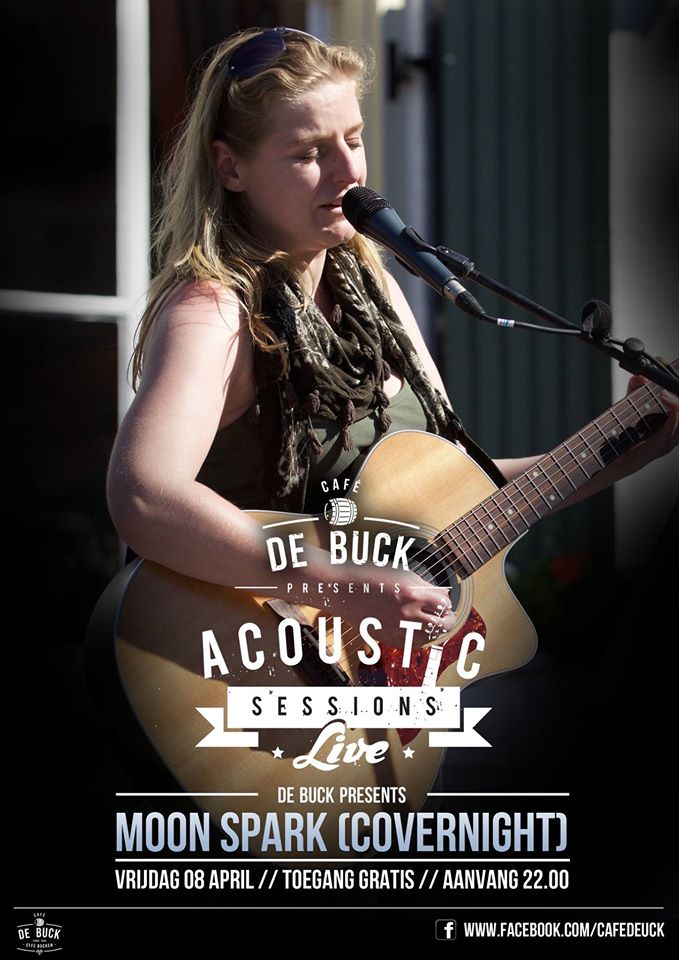 The poster for Café de Buck!

The old pub I spent months of my life at all these years ago is still very much alive and kicking (ass) in the center of town! Peter: I had an awesome night and I really hope we’ll be able to do this again soon! Thank you so much! *hugs tight*

The bar at Café de Buck!

For those of you that do not know anything about our country: We Dutchies have a king and every year we celebrate his birthday and call it Kingsday! Our flag colours are red, white and blue with an orange banner that goes along with it. We Dutchies all go completely crazy on Kinsgsday each year! This is what our capital city looks like every time:

Kingsday, we call it Koningsdag

My oh my, where the weather reports for Kingsday this year baaaaaad! A forecast of rain, snow, hail and much more nasty stuff. I was planning on going out and play music in the streets, but that plan came to a hold pretty quickly with that shitty forecast. Being bummed at home, I suddenly had a thought, which turned into an idea! I Went to the trainstation (with all the drinking going on on Kingsday pretty much everybody travels by train), sat down on a beercrate in the waitingroom and started playing some tunes. It was really nice in there (and covered from rain/hail/snow stuff)! It didn’t take long before people started to decorate me with all kinds of orange things, scarfs made of feathers and the likes! It was a complete hoot! I was also taken care of by the crowd with refreshments :D! After all this pampering I took off to visit a local pub nearby where Sher, Pelle and Paul were doing an amazing show! In hindsight the weather wasn’t really all that bad and I had a heck of a time on Kingsday! <3

In May I was finally able to call myself smokefree for a year! An accomplishment that has two sides to it; It was both hard and easy at the same time to kick the habbit that kept me busy for about 18 years of my life. The hardest and most frustrating about it is the metabolism the ciggies left me with: “a slowpoke one” and as a consequence of that I gained a lot of weight and now look like a sea elephant. I’ve been hearing some people say the metabolism does speed up again after some time. Well… let’s just say I’m still waiting for that moment, haha! Overall I am very proud of the fact I kicked the habbit though and I don’t miss the cigarette at all! Cheers to clean lungs!

I really want to tell you all shortly about my visit to the festival named “Little New Orleans” in Utrecht. Blues, Jazz, Elvis, Brassbands, Singer songwriters: the whole shebang! An experience to never forget and definitely count me in for next year! That was a rush!

The next day I performed at the petting zoo I used to work at! While there was a contest going on for kids and grownups that love and know horses! It felt like a warm celebration of spring and a big thank you to all the people that made it such a great day!

Here are all the winners of the day!

And last but everything but the least; the first round of

‘the best campfiremusician of Holland‘!

I signed up for this purely for fun and I was all set on participating, having a great time and go home after that. I never expected to win the round and to be sent off to the finals of the contest was something beyond my beliefs! I want to put out a warmhearted thank you to Zegenoord, all the people that were there but most of all the other contestants: Anouk Ballins, Sleeping Beauty, Ironny and Sweet Hannah. You are all an amazing bunch of people to have met and I hope dearly that we all meet again and keep in touch! I will wear the victory proudly and I also hope to make you all proud in the finals of ‘the best campfiremusician of Holland’!

announcement of the winner at Zegenoord

Next to all this amazing cool stuff you just read, I also still play every two weeks opening the saturday night at

THE PLACE TO BE FOR LIVE MUSIC IN NIJMEGEN: DOLLARS

Thank you all the sweet people at Dollars and also the customers! You make me feel very special every time I get up on the stage! *sending out a big bubble of love*

On that bombshell I’ll leave you all again with a little preview list on what’s to come this summer season: